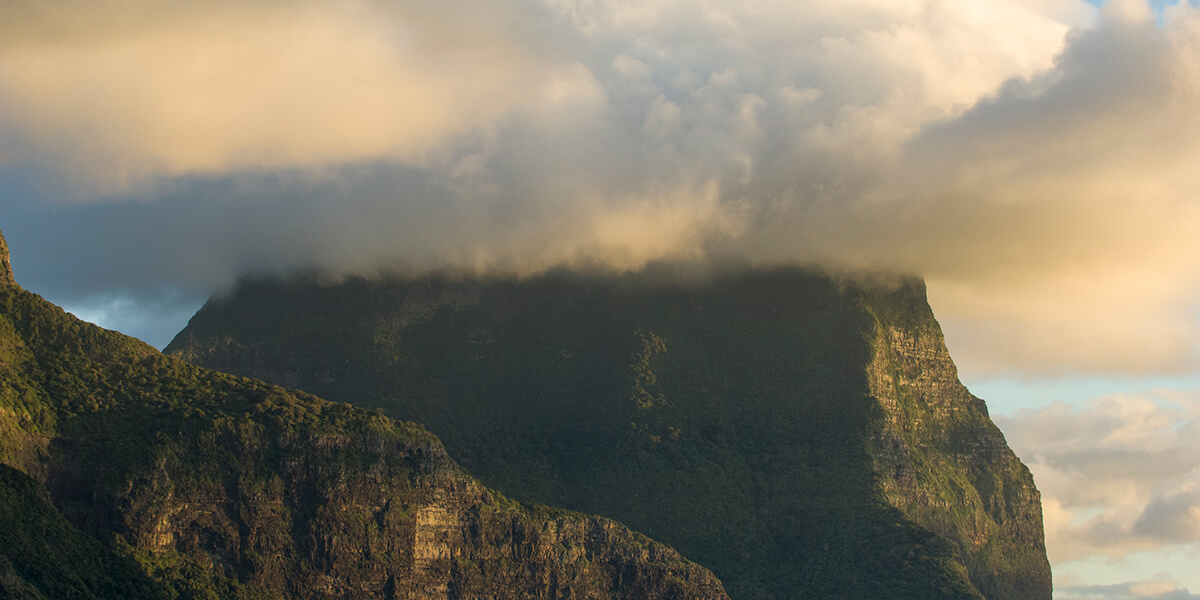 Like the rest of the world. Lord Howe Island is already experiencing the effects of Climate Change. The island is seeing a decline in annual rainfall, from the records that began in 1882.  The summer temperatures are getting higher, with daytime maximums over 28°C not uncommon now. These changes are impacting ecosystems on the island. Dead epiphytes on Mt Gower, February 2019
Dead Forest Canopy on Mt Gower, 2019
Dead foliage in the canopy of trees on the lower sloes of Mt Lidgbird, 2019.

At particular risk is the Gnarled Mossy Cloud Forest. This forest is a globally unique ecosystem as it is found only on the two peaks of Lord Howe Island, at altitudes of over 750m. This unique ecosystem is directly threatened by Climate Change as the average temperature rises and rainfall and cloud cover become more variable.

Temperatures have risen over the past century, and are expected to continue to increase in the future. Plants growing in the Cloud Forest on Mount Gower summit are particularly vulnerable to rising temperatures because they cannot move to a higher, cooler altitude to adjust to warming temperatures.

There has also been a decline in annual rainfall over the past 100 years on Lord Howe Island. Lord Howe experienced its lowest annual rainfall in 2018 (984.6 mm), according to data collected by the Bureau of Meteorology (BOM).

Lord Howe also had its driest December on record in 2018, with just 8.2 mm of rainfall, and its driest January on record in 2019, with only 1 mm of rainfall during the month, less than 1% of what the island would usually see at that time of year. Three hot dry summers 2017, 2018, 2019 have impacted the Gnarled Mossy Cloud Forest through canopy trees and epiphytes dying. Rainfall variability is projected to increase in the future.

Since 1945, there has been a long-term decline in the proportion of days with cloud cover around the mountain peaks on Lord Howe Island. The semi-permanent cloud layer is important in sustaining the Gnarled Mossy Cloud Forest, as it provides the moisture and humidity needed to keep the unique plant communities alive. This is particularly vital during periods of low rainfall.

Cloud loss also increases the direct solar radiation exposure which heats and dries out the canopy, threatening the existence of this unique forest. As air temperatures continue to rise with climate change, scientists anticipate this will increase the altitude at which clouds form over tropical mountains, adding further pressure to the ecosystem.

The Tasman Sea is the ocean body that is showing the most warming of any ocean in the world. Off the east coast of Australia, the southward flowing East Australia Current is warming and pushing further south. This region is a global warming hotspot. Evidence from the Solitary Islands, Tasmania and New Zealand shows many fish species are moving south as water temperatures increase in the Tasman Sea.

In summer 2019 the island experienced its second coral bleaching event when warm water around the island reached 27°C in January and February. Areas within the Lagoon showed varying degrees of coral bleaching, from low at outer Lagoon areas to severe at Sylphs Hole.

Fortunately, ex tropical Oma moved south and produced strong southerly winds and increase in swell that pushed cooler water into the lagoon and around the Island giving the corals much needed reprieve; and the corals largely recovered from this bleaching event.

As the world’s most southern coral reef, the cold water corals are part of what make it so unique. However, scientists believe ocean warming and acidification will threaten cold water coral species more than their warm water counterparts.

Much of the island infrastructure such as the airstrip, air terminal, roads, jetty, some houses and accommodation are at a low elevation and at risk from rising sea levels.

Coral bleaching
Storm waves in the lagoon, 2019
Erosion of sand on Lagoon Beach