Lord Howe Island is the eroded remnant of a large shield volcano that erupted from the top of the Lord Howe Rise around 7 million years ago. Lord Howe Island and Ball’s Pyramid are the emergent portions of two volcanic seamounts that lie on the western edge of the Lord Howe Rise, a submarine plateau, about 3000 kilometres long and 300 kilometres wide, extending from New Zealand to an area west of New Caledonia. They are also the most southerly and the youngest of a chain of nine volcanic peaks that run north to the Nova Bank, west of New Caledonia. The chain was formed as the Australian crustal plate moved (and continues to move) slowly north over a stationary hot spot under the crust. Every so often a weak section in the crust allows molten rock to break through and form a volcano.

The other volcanic peaks in this chain were formed earlier and are consequently older and further north. Although once islands, they are now completely eroded and exist only as submerged seamounts or ”guyots”.

Geologists believe that there were two main volcanic episodes in the formation of Lord Howe Island. Most of the volcanic activity took place some 6.9 million years ago, and probably comprised several volcanic vents, ultimately producing a large shield volcano about 30km in diameter characterised by gentle slopes of only about 8 degrees. It is thought that the volcano’s maximum height above sea level was about 1,000 metres.

Around 6.3 million years ago the area around the main vent (near Mt Gower and Mt Lidgbird) collapsed and left a huge oval-shaped pit or caldera, perhaps five kilometres long, two kilometres wide, and 900 metres deep. At this time further volcanic material pushed up from beneath the earth’s crust to infill the caldera in a series of horizontal lava flows, varying from one to thirty metres in thickness. These horizontal lava flows can be clearly seen in all the exposed cliffs on Mt Lidgbird and Mt Gower which still rise to 875 metres above sea level. As some of the basalt solidified, conditions were right for cooling cracks to form, giving rise to lines of vertical columns within the layers. This columnar jointing is now best seen in the cliffs high on Mt Lidgbird. In this second period of volcanic activity, the basalt rocks were harder and more erosion resistant, standing today as magnificent ramparts of the southern mountains.

As the Island was forming, fresh molten volcanic material pushed up through existing cracks in the already-hardened basalt, forming straight, often vertical seams known as dykes. These are typically 1 to 2 metres thick, but can be up to 4 metres thick. 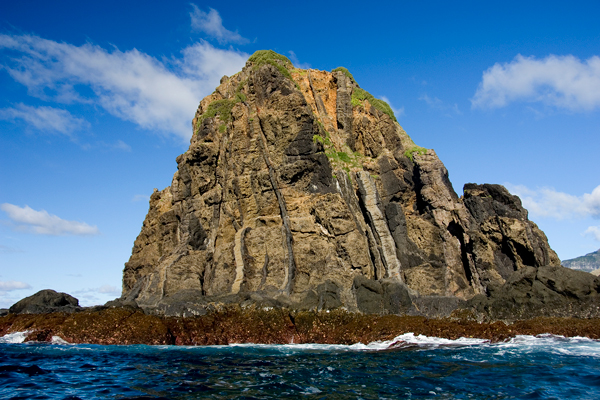 Dykes are exposed around much of the basalt shoreline of the Island today. Well developed spectacular dykes can be seen at Old Gulch, Blinky Beach, Ned’s Beach and Muttonbird Point, and the Admiralty islets.

Eventually, as the Island drifted northward on the crustal plate, the volcanic activity ceased. Then the slow but relentless processes of erosion took over, and now 6.3 million years later, just 2.5% of the original Island remains above sea level.

Gale force winds often lash the Island and abrade the cliffs, forming intricately carved patterns in the rock. on the ocean floor. However, the relentless ocean waves are responsible for most of this erosion. Sometimes large sections of cliff become severely weakened by the columnar jointing in the basalt rock, and thousands of tonnes of rock collapse under the influence of gravity.

The aftermath of such events can be seen on the western flank of Mount Lidgbird, with many boulder-strewn scree slopes. While events like this are uncommon in human time scale, chunks of rock are continually falling off the cliffs, and fresh scars are seen each year. The chunks of rock that fall to the coastline are rolled around by the surf, creating a shoreline of round, dark, smooth boulders. Sea levels have fluctuated dramatically over the past million years or so – particularly as global glaciation has repeatedly advanced and retreated. On at least nine occasions in the past 250,000 years the sea level has been 50 metres to 130 metres lower than at present.

Most of the oceanic erosion of Lord Howe Island occurred when sea levels were around 100 metres lower than they are at present, the remnants of the wave-cut platform now forming an extensive submerged shelf 15 kilometres wide around the Island.

At these times of lower sea level, more extensive shallow marine environments existed on the Lord Howe shelf, allowing greater growth of marine organisms such as algae, corals, starfish, urchins, crabs and molluscs. As these many marine organisms die and crumble their fragments are ground up by the pounding action of waves and are wind-blown against the Island, forming beaches and dunes.

At various periods of higher or lower sea level, these sands have been deposited as beaches, lagoon sediments, sand dunes or soils. Over time, rainwater seeping through the sand has cemented the grains into a type of sandstone known as calcarenite.

Around 25 percent of the Island, over much of what is the settlement area today, is in fact covered by this calcium carbonate-based sandstone.

The most dramatic of Lord Howe Island’s sedimentary deposits are the 40-metre-high cliffs along the east coast from Ned’s Beach to Middle Beach; these cliffs having been formed by strong winds blowing ancient sand into dunes.

Thin layers in the rock at angles of up to 40 degrees indicate the angle of deposition of the dune, and even the direction of the wind when the dunes were forming.

Carbon dating of fossils in a number of the dune deposits suggests an age of 20,000 to 40,000 years, but it is believed that the calcarenite beach deposits behind Ned’s Beach were formed in the last interglacial period around 130,000 years ago when sea levels were roughly the same as they are at present.

The calcarenite rock is variable in hardness. Close to sea level the action of salt water cements the rock much more solidly than looser deposits higher up.

However, water attacks the hardened calcarenite through the action of various acids in solution unevenly dissolving the rock into a very jagged surface.

The resulting topography is known as karst. This scenery is fascinating to explore, but very hazardous to walk on as the weathered edges are very sharp.

While these ancient beaches were forming, the now extinct Horned Turtle, Meiolania platyceps, was roaming Lord Howe Island. Today its bones remain as fossils, in the soft calcarenite rock.

Meiolania platyceps is one of a group of bizarre fossil turtles of prehistoric appearance, having horns on the skull, and a long tail with bony rings and a heavy terminal club.

A further fascinating feature of the fossil sand dunes is the occurrence of limestone caves at North Bay where the calcarenite deposits extend to almost 100 metres in height.

Over time, rainwater trickling through weaknesses and crevices in the rock, formed underground streams, which in turn carved out substantial caverns in these deposits, the largest being about the size of a double-storey room. The dripping of water with dissolved calcium carbonate from the cave roofs, has formed stalactites and stalagmites, and “flowstone” formations can be seen where similar deposits have been left by running water.

The Pyramid is a spectacularly rugged volcanic fragment 23 kilometres to the south of Lord Howe Island, which clearly illustrates the last stages of erosion of a volcanic island.

As Ball’s Pyramid is separated from Lord Howe Island by a trench of water 800 metres deep, it is believed to have always been a separate island, formed by a second shield volcano, roughly 12 kilometres in diameter.

Today the Pyramid is just 1100 metres long and about 200 metres wide at its base. It rises 551 metres high with knife-like ridges on both ends.

Around 100 lava flows exist in the cliffs, dipping about 8 degrees to the northeast, indicating the centre of its volcano was located to the southwest. Renovations to the Museum reception area and restoration of the wooden flooring are complete.

Together with the Friends of Lord Howe Island, the Museum was host to Citizen Science Beetle Week during August.

McCulloch’s Anemonefish is endemic to Lord Howe Island. Author Brendan Atkins tells of his research while writing his book “The Naturalist”.