Citizen Science is on again

In August, the Museum is partnering with Friends of Lord Howe Island and the Australian Museum on a beetle survey program.

The Lord Howe Island Museum has run a number of Citizen Science programs over many years. And in August 2022 the Museum is partnering with the Friends of Lord Howe Island and the Australian Museum on a beetle survey program.

Lord Howe Island has over 530 beetle species and there are a number of large species which can be key indicators for the state of the environment. Many of these larger beetles were significantly predated on by rodents for 100 years and have been very scarce for decades.

Dr Chris Reid, from the Australian Museum, has been surveying beetles on the island over the past twenty years.

In 2018 and 2019, in partnership with the Lord Howe Island Museum, he carried out Citizen Science projects doing beetle surveys with locals and visitors. There is therefore a reference point for beetle numbers at various locations prior to the rodent eradication.

There has been an expected recovery in beetle numbers following removal of rodents in 2019, with many casual observers reporting this. Some beetles that were considered quite rare are now being commonly seen.

In August 2022, Chris Reid and  Dr Ian Hutton (curator of the museum) will lead a number of day, and night survey trips into the forest with Friends of Lord Howe Island volunteers, to search for beetles. These additional eyes looking for beetles will greatly assist in the success of the surveys.

This activity represents one of the foundations of Citizen Science. There are simply not enough trained scientists to carry out all the observations and recording that are required, but there are interested members of the public who are keen to participate.

The Friends of Lord Howe Island has sponsored the travel and accommodation for Chris; and the Museum is providing the venue and support for workshops and lectures. While Chris is on the island he will also be doing some extra targeted beetle surveys in remote areas. 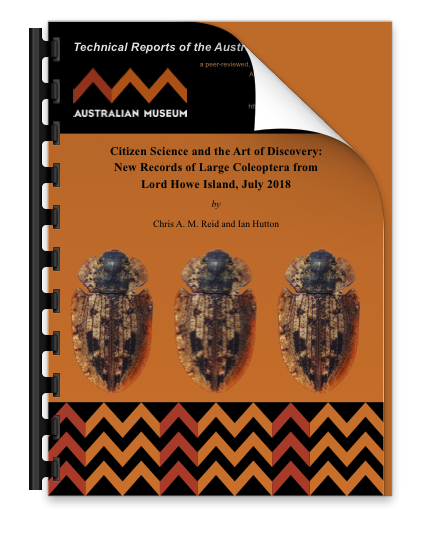 “Citizen Science and the Art of Discovery”

This document provides the baseline for numbers of beetles on the island prior to rodent eradication.