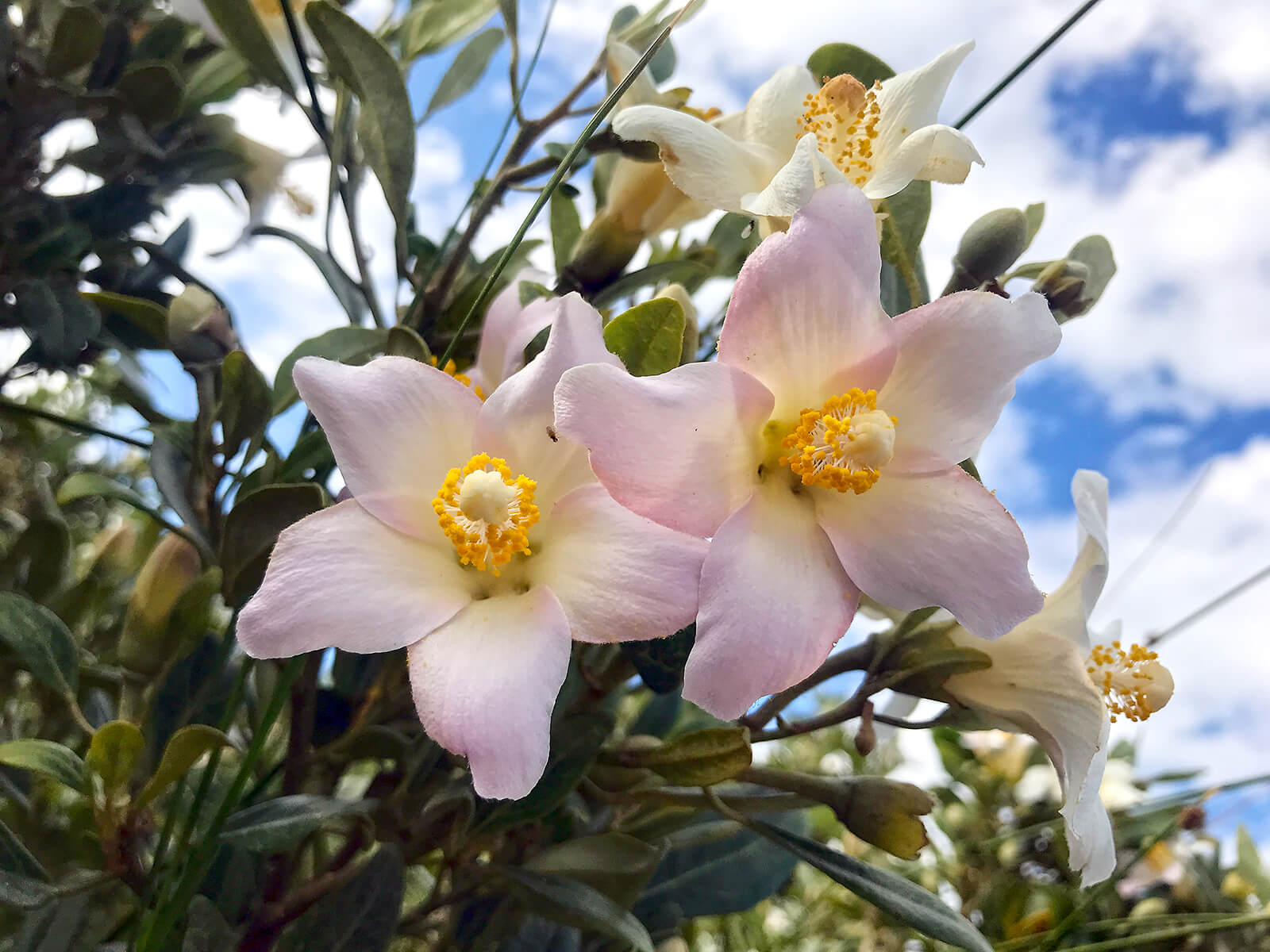 The most prominent of our lowland native flowering plants is the tree known locally as Sallywood, Lagunaria patersonia.

In early Summer its white and pink flowers are in full bloom. Lagunaria patersonia also occurs on the Queensland coast, and on Norfolk Island where it is known as White oak or Cow itch tree, because of the irritating hairs inside the seed capsule. It has been used widely in many States as an ornamental street tree, often marketed as Norfolk Island hibiscus.

While Lagunaria patersonia exists as a tree species widespread across the island from sea level to about 500m altitude, it also survives well in wet swampy lowland areas.  In the past, before clearing for pastures, there were five swampy areas dominated by this tree. This swamp community only occurs on Lord Howe Island, and in 2003 was formally classified as the “Sallywood Swamp Forest”.

Sallywood Swamp Forest is generally 10-15 m tall, dominated by the Sallywood tree, sometimes growing with Hibiscus tileaceus and Myoporum insulare. Shrubs are generally sparse and may include Aegiceras corniculatum, Cryptocarya triplinervis and Celtis conferta subsp. amblyphylla. The groundcover may include Cyperus brevifolius, Cyperus lucidus, Commelina cyanea and Hydrocotyle hirta, and is generally sparse where the tree canopy is intact, but may be denser on the edges and where the tree canopy has been disturbed.

Research by Dr Tony Auld and Dr Ian Hutton resulted in this vegetation community being listed as a Threatened Community under the NSW Threatened Species Conservation Act (TSC Act).

This project represented a very significant turning point in the way the Lord Howe Islanders saw the future of their land. The lease holders (Brian & Annette Young) permitted the Board to fence off part of their lease, secure from cattle grazing, and to re-establish the native forest behind the fence.

Twenty years later this forest has established well, with a closed forest canopy developed, and species recruiting from those plants put in 20 years ago. Another area at Soldiers Creek in the south of the settlement has also been rehabilitated.

Sallywood regeneration at the Old Settlement

The site of the former Old Settlement stand of Sallywood, in 2001
The re-established stand of Sallywood at Old Settlement, in 2021
In 2002 the Friends of Lord Howe Island and the Lord Howe Island Board successfully applied for a grant of $6,400 to provide fencing material and native plant stock to restore the Old Settlement Sallywood Swamp Forest. In June 2003 18 Friends volunteers put in a total of 54 hours labour to plant out approximately 850 plants, selected for this site to replicate the forest mix that may have been there before clearing.
Volunteers from the Friends of LHI, re-planting Sallywood at Old Settlement

Pinetrees back paddock - a large patch of Sallywood being restored

In 2018, the resort lodge “Pinetrees” partnered with the Lord Howe Island Board to seek funding to restore a large patch of Sallywood Swamp Forest in the Pinetrees back paddock. In 2019 Pinetrees received $100,000 from the NSW Government through the NSW Environmental Trust, with Pinetrees contributing an equal amount. Stage one involved planting 5,000 native plants, and stage two is now underway.

This story will be featured in the Museum new History Gallery displays, as an example of the direction the island is going with sustainable living in a collaboration between the community, the government and scientists.

Our Sallywood Swamp Forest is Growing
Pinetrees website, May 2022

Michael Bugelli, exhibition designer from Detached made a quick visit to further progress the refurbishment of the Historical Gallery displays.